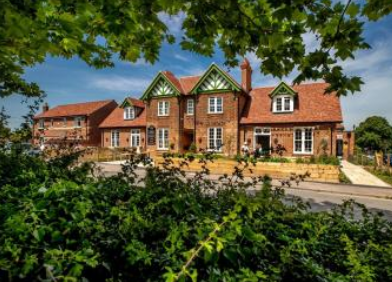 Celebrations marked the completion of work to transform Southwold’s old Victorian cottage hospital into nine affordable homes, and a community hub containing a nursery, business spaces, café and a new location for the town’s library.

The redevelopment scheme was devised by community group, SouthGen – formed in 2017 with the aim of retaining the old hospital for community use.

The Old Hospital Nursery was the first service to open its doors at the Field Stile Road building on April 25 this year, followed by the library on May 5.

It now also boasts The Canteen farm-to-fork community café and the Southwold Works co-working space, as well as nine affordable homes provided by Hastoe Housing Association, which bought the freehold in 2018 and gave SouthGen a 999-year leasehold for a peppercorn rent.

SouthGen chairman and Southwold town councillor, Jessica Jeans said: “This is a really good news story for Southwold – and East Suffolk Council (ESC) has been such an important partner in making it happen.

“We worked with almost every department in ESC; each gave us support and sound advice. It’s one of the best examples of an enabling communities strategy you could wish for.

“We wanted to prevent the loss of full-time housing to the holiday let, address the impact of that sector on affordability, and provide reasonable rents for much needed community facilities.

“We’ve been able to restore the character of a locally listed building and create deeply sympathetic additions that are in keeping with its context in a conservation area. It has been built to a high level of environmental sustainability, with air source heat pumps and solar panels.

“This project sends a strong message about what communities can do if they feel empowered and supported. Town mayor Will Windell was one of our earliest believers, and the then district councillor Michael Ladd helped us negotiate the bureaucracy.”

Southwold and District Hospital closed its doors almost 120 years after being built and initially funded by local people – and becomes the first in England and Wales to be bought back and redeveloped for new community purposes.

The new homes include four affordable rent and five shared ownership properties, including one wheelchair accessible home, and all prioritised for people with a local connection.

Cllr David Ritchie, East Suffolk Council cabinet member with responsibility for Planning and Coastal Management, said: “SouthGen and its members deserve every credit for the amount of dedication shown in taking this project from vision to completion.

“It’s an ideal example of a community taking an asset-based approach to promoting economic growth and value for money in a sustainable way.”

Cllr Richard Kerry, East Suffolk Council cabinet member with responsibility for Housing, said: “I applaud the efforts of SouthGen to bring full-time affordable rent and shared ownership housing units to the town, while also providing a new home for the local library, and space for a nursey and cafe. It fulfils a need not just for more housing, but more of the right type of housing.”

The homes and community hub were developed in partnership with Hastoe Housing Association. Modece Architects designed the award-winning project, built by Wellington Construction Ltd of Lowestoft.

Matthew Bell, Director and Architect at Modece Architects Ltd, said: “We started working with SouthGen on the proposals in 2017 at a time when the vision was a faraway dream.

“We are so proud of all the hard work that was put in by everyone involved to achieve the opening of these great community spaces five years later.

“It’s been a pleasure to work with such a caring and passionate community group, who will no doubt go on to achieve further great things.”

Celebrations included the planting of a Victoria Plum tree, to commemorate both the anniversary of work starting on the old hospital, on Queen Victoria’s Diamond Jubilee on 22 June 1897, and the completion of refurbishment on the new site, coinciding with Queen Elizabeth II’s Platinum Jubilee. 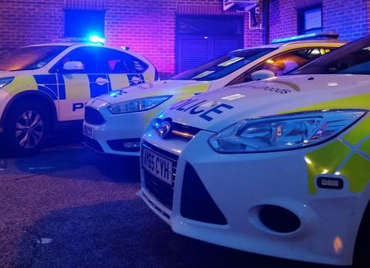 Lowestoft Police Link Up With Nightclub to Tackle Drug Taking

Nearly 20% of clubbers attending a nightclub in Lowestoft tested positive for drugs as they walked in. Officers from the local police station teamed up with the Venue at Claremont Pier for a proactive evening. Overall 3 crimes were recorded - two for possession of cocaine and one for cannabis. Anti-spiking cup covers were also given out to clubbers. The Neighbourhood Partnership Team with support from the Kestrel* team for […]