The Players Theatre, situated on Battery Green Road, Lowestoft has been awarded a series of small grants which have been used to fund much needed developments.

The first was a grant of £4,920 from the Theatres Trust, an organisation which champions the future of live performance, by protecting and supporting theatre buildings. This together with a grant of £2,500 from The Suffolk Community Restart Fund has been used for a ‘knock through’ from the Theatre Bar to the main Auditorium through a previous archway and the installation of a specially made set of sound proof bi fold doors.

“The idea of carrying out the knock through has been around for some time” said Graham Jermyn from the Players Theatre who applied to the Theatres Trust for the Grant.

“Thanks to the Theatres Trust and the Suffolk Community Restart Fund we have finally been able to implement our plans which will allow our patrons to enter and leave the Auditorium with more space around them. The original entrance often created a bit of a bottleneck, this was of particular concern following the pandemic.”

Ryan Takman who manages scheduling at the Theatre said “The new doors are fantastic as they create more flexibility. Last weekend for our Comedy Night theatre goers were able to enter through the new doors which were then closed for the performance. On Saturday (13 November) the doors will be kept open all evening for our guest performers Let There Be Rock – an AC/DC tribute act. This will allow everyone to enjoy the music throughout the evening, even when they pop to the bar to refill their glass.”

The knock through and installation of the doors didn’t come without problems as the work had to be scheduled between the Lowestoft Players’ rehearsals for their production of Joseph and live shows with audiences.

The Players Theatre, formally known as The Bethel was built in 1899 with the archway bricked up at a later date using very strong but notoriously messy Fletton Bricks. 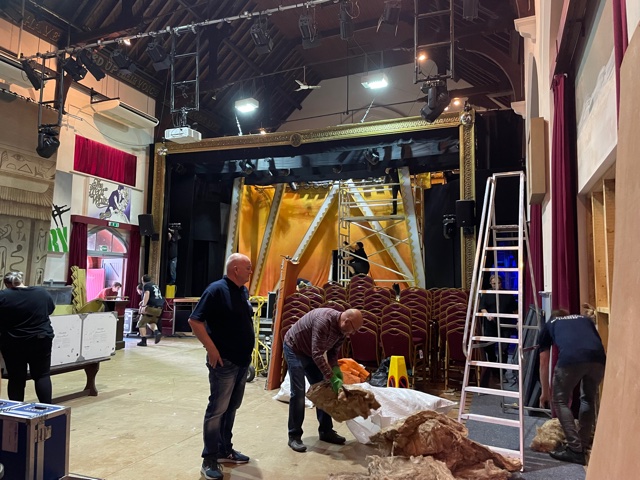 Founded in 1967 and with many award-winning productions to their name, The Lowestoft Players are one of East Anglia's premier amateur theatre groups.For over 50 years the society has been performing pantomimes, musicals, plays and revues to packed audiences from across the region.The society usually performs two musicals, one play/revue and one pantomime per year. These productions are performed at 'The Marina Theatre' - or at the intimate 200 seater theatre 'The Players […]